The day I realised that my values are actually quite important to me.

I’ve been training leaders about the importance of values based leadership for many years, stressing the importance of values for transformational leadership approaches, emotional intelligence and followership. I had always thought that I truly believed what I was saying, you know – authenticity and all that. Then, as part of my new adventure as a freelance trainer,  far away from my previous career I attended a ‘meeting’ with a potential company I was considering working with as an associate trainer. That was the day I realised that my values are quite important to me, it’s not something I do, it is part of who I am.

I had looked at their website (I’m not totally naïve, I do my homework) it looked good, the approach to training that they presented seemed to resonate strongly with mine, they had credibility and I liked what they were saying, I thought that working with them as an associate would be good for me and for them. As such, to meet with them I was willing to take a car, a bus, two trains and a taxi to get the hotel, where I stayed overnight. Yes, all paid by me, I considered it an investment.

The next morning the approach for the day unfolded, there was to be me and two other trainers plus the owner of the company and one of his directors. We all gathered in the meeting room. We were given the opportunity to ask them questions…we played nice, none of us asked how much they were going to be paying! They were not specific about how many associate trainers they were looking for, that was fine, it removed the competitive element for the next part. They wanted us to show them what we could do; we were to work together to develop a session to ‘showcase’ our skills. I suppose a shirts off fight to the death was a bit too far for them! They left the room and left us to get on with it.

I was the only one who had said I did training design as well as training delivery…I felt the others look at me hopefully. Luckily, I had been taking notes from the answers and was able to draw up three learning objectives for us to deliver. We quickly worked out who would do what and how we would deliver, I must say for three trainers who had never met, we worked together really well and there was little evidence of egos. The design was simple, we divided the session into parts – 1. Introduce a problem scenario, get them to define what the problem was 2. Consider the various options there may be, creatively considering out the box ideas. 3. Identify and apply organisational criteria to identify the best solution followed by a final summing up session.

The scenario presented to them was: 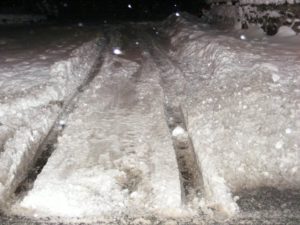 Its 08:10 in the morning, you have a large training event organised, 200 delegates are present, they are all at the venue, having arrived the day before, it has been snowing heavily overnight, it’s a couple of feet deep at the venue but all the delegates are safe. You take a phone call from the trainer who is due to present at 09:30, you know they live about 10 miles from the venue. They say, in a scared and slightly hysterical voice “I am stuck, my car has gone off the road into a ditch, the road is closed, there is no one about, there’s so much snow, I don’t know what to do….” then the phone goes dead.

We then asked them what the actual problem was they may be facing, whilst very rightly they identified they didn’t actually have a problem yet, after some further probing they identified that their problem was they may be short of a trainer for a 2 hour slot in the morning. We then went on to identify potential options with them and then the part where I really began to have some doubts, we asked them to identify the criteria they would apply as an organisation to select the best option available. We gave them the chance to consider the top three criteria to apply to their decision making process – they chose, Client, Cost and Time. I did try, I threw in options like – safety, risk, duty of care….all dismissed by them. What was important to them as an organisation was the relationship with the client, the cost of any solution and the time it would take to implement.

For the final session I asked about evidence based decision making, would the other members of the organisation understand the criteria to apply to decisions of this nature? If they as directors were not available, could they be confident that decision making would follow the same approach? Would they be able to justify their decision making process when “Trainer found dead in a snow drift” was the headline the next day?

The four hours we were together passed quickly, not so the ten hours it took for me to travel home and think about my values and what I had learned about their values.

I received a voicemail later in the week from them saying that I wasn’t ‘challenging’ enough in my approach in the classroom to meet their approach to delivering training, so I didn’t have to explain why I couldn’t work with them.

Client, cost and time are important, but my values tell me that your staff, even associates, should be your most important criteria. I know that when I was a manager if I had taken the phone call my first concern would have been the safety of the person in the snow drift. What would your criteria be?

p.s. They didn’t even buy us lunch.